sounds like an intake valve, or maybe valve seat letting go.
So I pulled over, parked by a mailbox on 35/Skyline, and started walking, hopefully to where I could get a cell signal.
LUCKILY, after about 4.5 miles, a car pulls up, and says "hey, is that your vintage honda? you need a lift" as a kind Samaritan gave me a lift all the way down 35, then 9, into saratoga village, where I could get cell reception, and an UBER to my house and van. (Thank you Eric!)
1.5 hours later, I've got the very dead hawk loaded into the van, and on my way home. gentle push on the kickstarter gives no movement, locked up. in gear, gently bumping the rear wheel backwards, frees it, but gentle kick forward and hard impact.

today I dropped the motor. - its getting packed up and shipped to the builder, for refresh and updates.. 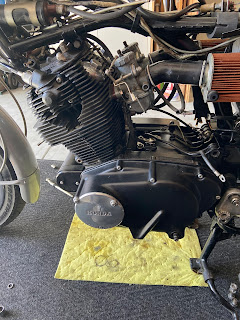 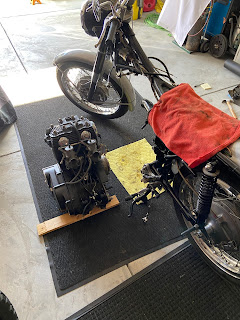 Stay tuned! old man with sore back happening in ~ 20 minutes!


(oh, did I mention, while dropping the motor?  got a Cox running?)
https://www.youtube.com/watch?v=brYBQAimmcY
# posted by cstatman : 6:04 PM  0 comments

I despise the question "how likely are you to recommend...."

I am not sure WHO in marketing has decided this is a decent measure of satisfaction.

NO,  you don't.   Normal humans do not sit and recommend banking, shipping, office supplies.

so If you ask "how well do YOU like Fedex"?   I'll say "holy smokes, they are my favorite shipping company, they get it delivered every time, and no BS"

but if you ask "will you recommend".  i'm thinking?   no,   I will be drinking margaritas and talking about somethiing fun I just did.

In India, they have the idea of the fat man on airplane.

He meets the team.

He takes everyone to dinner.

He learns about their challenges and needs.

He promises to help from afar, when he goes home.

Everyone has a wonderful time - KumBaYa!

then he takes taxi to the airport, goes through customs, and gets on plane.

Fat White Man on an Airplane - for 34 hours travel time.

By the time he gets back to Silicon Valley, he has forgotten everything he learned in India, and doesn't even return people's calls.  All friendships are forgotten.

My team used to LOVE me - because they claim i had a great memory, and did NOT forget all about India when i got on the airplane.


figured I may as well save it

a BUH-ZILLIOIN years ago, when the universe was young, and we rode dinosaurs like the Flintstones?

I was trying to graduate from the University of Texas - Austin.    Graduation was gonna be on a Friday, My dad was coming to town to see.   He went to A&M.   Called Austin "that infernal town by the capitol".   did not come visit me in college ONCE.   -- but he was coming for graduation to make sure i  was done with the place.

on Tuesday morning, my phone rang,  some office at the school.  I did not have enough credits to graduate.   I needed to come talk to them.

Bull-fuckin'-shit.   I was on my motorcycle and there in mere minutes.    Even the folks at the office were freaked out how fast I got there.

turns out, I took 3 sections of a government class, that was offered with same course number, but an A, B & C after the number, that did not show up on the transcript thing.   They wanted a letter from the Government Department Dean proving it was 3 separate classes.

I rode it across the campus to the goverhment building,  where, at 9:30am, I found the dean of students about to close up and leave the office.    Convinced the dean I needed a letter.   Dean called the College of Liberal Arts, and they said "yeah, Charles,  guy in a bathrobe, bunny slippers and motorcycle helmet?   yeah, we need a letter, not a phone call"

which pissed the dean off, who wrote out a letter on UNiversity letterhead telling them that yes, there really are three parts to the class,  that he teaches,  that they offer in their catalogue.   And maybe the Office of Liberal Arts should pay more attention to the courses than to fundraising.  And I should graduate.

thank you very much, ring-ding-ding-ding. -- and I rode BACK to the College of Liberal Arts to present said letter...  when?  the bastards tell me I have over 2000 unpaid parking tickets for leaving my motorcycle all over campus leaned against buildings, not in parking lots....

uhhhh,   (thinking I am totally fucked, because my bike at THAT VERY MOMENT --- was leaned against the side of the building).  I KNOW I just wadded them tickets up and threw them away.   University police isnt REAL police....

"If you don't let me graduate, I cannot make enough money to pay back the tickets, and I will stay here for-ever.   No one wants that do they?"

they granted a waiver, and let my parking record quietly dissapear.   They agreed I had all the requirements to graduate, and I could go home and put on real clothes.

Friday I walk drunkenly across the stage,  got a bit of rolled up paper that said "we will send your diploma later".   Got back to my apartment, and there was a bottle of cheap sparkling wine on the doorstep with a note from a VERY pretty girl from one of my classes that said "call me tonight, lets drink this"

I had to put her off till saturday,  she put me off for 2 semesters--- it was worthwhile.

this build has been going on from concept for about 15 years.

Special thanks to:
Ken Armann for the magic- http://www.kenarmann.com/
Sportster Diana for pushing Ken
Mac Whiteside - for the amazing motorwork and ceramic coatings
Matt Buck - for the support and super cool tank graphics

Many years ago, I started racing a Yamaha RD400 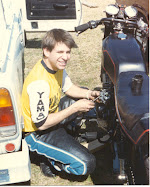 I had NO clue what I was doing, but OMJ tolerated me and helped me along.

A fella sold me a BSA 250, and OMJ told me if I ever wanted it to go faster, I needed to take it to one of the last living Gods of Speed.  Mr. Jack Wilson at Big D Cycle.  If you wanted a brit bike to go fast, Mr. Wilson was the man.   He tuned the world famous "Texas Ceegar" in 1954.  powered by a 650 Triumph Thunderbird motor - it went 193.3mph at Bonneville-- a new world record, so important that Triumph released the now iconic Bonneville to celebrate the win.

Mr. Wilson tolerated me in the pits.  I was young and stupid, but I was trying my best. He didnt have time for my ridiculous BSA 250 - but he told me Keith Martin, his apprentice, might do the work, and was looking for a 305 Honda Superhawk.    OMJ had a spare, we made a deal, I took both bikes up on a trailer, and traded Keith the honda for some work on the BSA.   Starting my love of ridiculous, underpowered brit bikes that loved to fall apart.

Decades later, I took ANOTHER BSA Starfire 250 tank to this guy Ken, in San Jose.  He laughed a little when I brought the tank into his shop and asked him to seal the fiberglass.   He said it wasnt an immediate process, and I couldn't ride the BSA home that day.

I had to explain I did not come TO his shop on the BSA.  I strapped the tank on the back of my Royal Enfield.   At which point, I believe,  Ken realized I was quite insane, and we became a pretty decent friendship.

I sold the 2nd BSA 250 with sidecar to some buddy of Kens,  and we used the money to start the Norton P-11 Project. 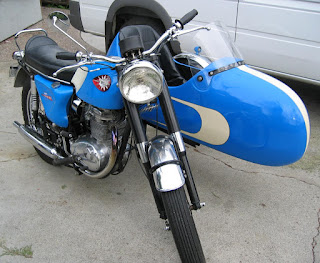 The P-11 started out as a pile of parts in his shop.   I think the motor lived under his desk for 10 years before I even came along.

Ken and Diana gathered parts and started assembling.  I mailed the motor to Mac Whiteside, who did some magic onto it , then ceramic coated for it to keep heat in some places, disperse it in others, retain oil in some spots, shed it in others....

Ken called in favors from all over town.   for years.
Tom Keeble at Barnaby & Company was instrumental in the oddball machineworks necessary for this foul thing to come together.  He helped graft a Yamaha XS650 front end to it, so I had 35mm fork tubes, and modern disc brake.  He connected us with a guy who custom built the seat.   from nothing.   He made brackets, mounts, widgets and things

Matt copied and printed out the graphics for the tank. it combines the traditional Norton Logo, with the "Norton Birds" advertising series... 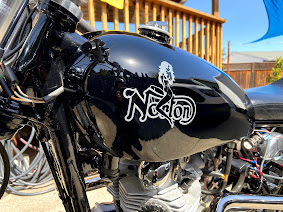 Now its home, I cleaned it up a bit.  the wiring harness needs some tidying, the forks need some polishing,  but it has gone with my paint scheme  "black or shiny"

heres a quick video,  yes, I know the exhaust flange is loose, and the fender needs tightening,  I'm workin on it.